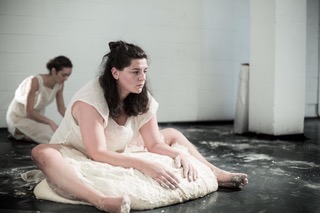 Our final workshop of October takes place tomorrow at 7pm and, holy heck, do we have a doozie for you!

Renée van de Schoor will be leading us through devising and creating theatre through physicality.

“In this workshop we will explore elements of devising theatre: a method of theatre making in which the performance/piece originates from a collaborative working process.

Using physicality as the main tool, we will explore expression through physicality, creating collaborative work and mixing it together to create a devised piece.”

Renée van de Schoor graduated from the University of the Arts Utrecht, with a degree in Theatre and Education.

Throughout her studies, she directed several productions with a heavily physical component, and graduated with a completely devised production.

Renée has been extensively involved with No Drama Theatre, she gained experience both on stage and behind the scenes as director, actor and producer and in her current role as secretary in the group’s committee.

After directing a sell-out production of ‘And Then There Were None’, she produced ‘Closer’. Furthermore, she appeared as Woman in ‘The Virtuous Burglar’, Lilly and Lilith in ‘She Kills Monsters’ and in performance piece ‘Heed, to the Mound’ as part of Fringe Festival Dublin (photo). Renée was production manager of ‘The Man Who Shot Liberty Valance’ and directed ‘Haven’ as part of Scene + Heard Festival 2019.

Most recently, she directed ‘Mistaken’ as part of Short + Sweet Festival Dublin, which was on in the Sean O’Casey Theatre last week.