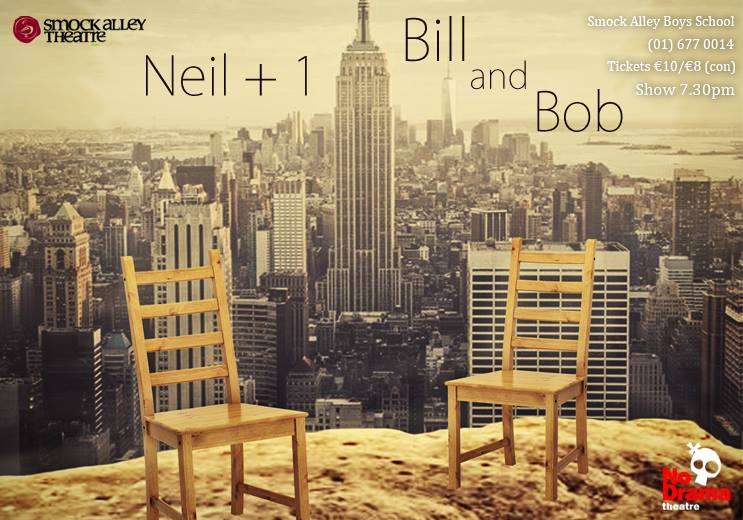 We are thrilled to invite you to this very special Improv Night.
Back to Back improv, where not one, not two, but three (+1) very talented people will take the stage of Smock Alley’s Boys School.

Founding member, Neil Curran will be blowing us away with his show Neil +1 and on top of that, we welcome the extremely handsome and talented Bill and Bob, aka Shane Robinson and Tamryn Reinecke.

All these festivities are only a few sleeps away! So get your tickets (here) while they’re still hot hot hot!!
29th March | 19:30 | Smock Alley Theatre | The Boys’ School

Neil +1 is a unique improvised theatre show starring Neil Curran and a random audience member. Completely unplanned and improvised, an audience member is invited up on stage and becomes a leading performer in the show! There are no tricks, plants or gimmicks; everything is made up on the spot. What unfolds is an alternative view of the life of the audience member, unfolding through improvised narrative.

Bill and Bob are the improvising duo of Shane Robinson and Tamryn Reinecke. They perform a specific style of improv creating real characters from the quirks of human nature. Exploring these relationships on stage can result in boundless hilarity and other times a melancholy undertone either way it’s always in pursuit of the truth of the moment.

… for a brilliant, informative, well thought-out, inspirational workshop on some exciting improv techniques.

Following the success of last years “whose post is it anyway” we’re going to be holding another improv night on the 20th Of November in Lonegans Plough on Abbey st.

Our carefully selected team of comedy geniuses will have you in stitches. Expect organised chaos , a format something similar to the hugely popular “Whose line is it anyway” tv show.